A Gentleman’s Guide To Love and Murder A distant heir to a family fortune sets out to speed up the line of succession by using a great deal of charm and a dash of murder. A Gentleman’s Guide To Love and Murder is the knock-’em-dead, uproarious hit and the most-nominated show of the 2014 season. With ten Tony nominations and four wins, including Best Musical, Book, Direction and Costumes. It also earned seven Drama Desk Awards (Including Best Musical), four Ourter Critics Circle Awards (including Best Musical) and one Drama League Award (Best Musical). 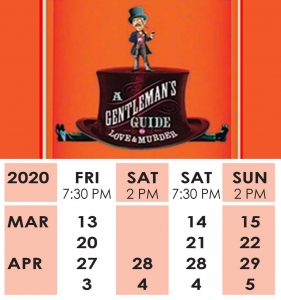 Today's Music Variety fuels the sing-along-soundtrack that keeps the innovative workplaces in the Seattle area inspired with songs from the 80's through today. Warm cares about the community we live in through deep participation in hundreds of annual events that focus on women and families.
Previous Beehive the 60’s Musical
Next Lumaze: Lost in Lights – Fairytale Christmas

Copyright © 2020 Hubbard Radio Seattle, LLC | 2060 Digital Pay | EEO | Careers | General Contest Rules | Terms of Use | Privacy Policy | Simple Pay | Public File | DMCA Notice
Any person with disabilities who needs help accessing the content of the FCC Public file should contact Lisa Closterman at lclosterman@hbi.com or (425) 653-9462
This web site is not intended for users located within the European Economic Area | Do Not Sell My Info - CA Resident Only